In Whose Ruins With Author Alicia Puglionesi & Filmmaker Jason Corwin 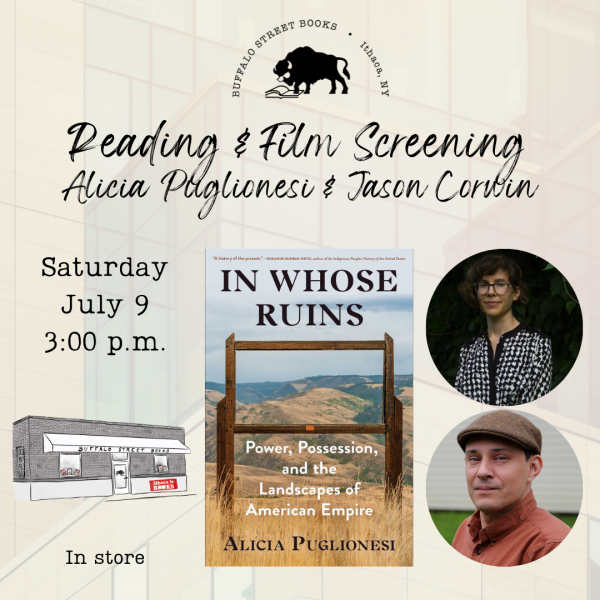 Western Pennsylvania and New York were the birthplace of the modern petroleum industry, and oil played an important role in New York politics, including in conflicts with the Onödowa’ga:’ (Seneca Nation) over leases and land rights. This history is one part of Alicia Puglionesi's new book, In Whose Ruins: Power, Possession, and the Landscapes of American Empire, which examines four sites of resource extraction that also yielded scientific and spiritual narratives core to US settler-colonialism. Along with Puglionesi's reading from the book, Jason Corwin, Clinical Assistant Professor at University at Buffalo Department of Indigenous Studies, Onödowa’ga:’ (Seneca Nation) citizen, and community-based environmental and media educator, will discuss ongoing environmental justice issues in the region and show excerpts from his films about Indigenous land and water defense.

Alicia Puglionesi is a writer, historian, and Baltimore resident.

I study the history of knowledge-making and mystery in the human sciences. My second book, In Whose Ruins: Power, Possession, and the Landscapes of American Empire (2022), examines four sites of resource extraction that also yielded scientific and spiritual narratives core to US settler-colonialism. My first book is Common Phantoms: An American History of Psychic Science (2020). Other writing, scholarly and journalistic, deals with mediumship, haunting, and memory in the American landscape.

Jason Corwin is a Clinical Assistant Professor at University at Buffalo’s Department of Indigenous Studies. He is a citizen of the Seneca Nation, a lifelong media maker, and was the founding director of the Seneca Media & Communications Center. Jason has extensive experience as a community-based environmental educator utilizing digital media to generate engagement with Indigenous ways of knowing, sustainability, and social/environmental justice.

In Whose Ruins: Power, Possession, and the Landscapes of American Empire (Hardcover)