We are thrilled to be doing a special book club event with Ithaca's very own Kate Manne for the release of her new book Entitled: How Male Privilege Hurts Women!

Check out this article in the New York Times abour Kate and Entitled: https://www.nytimes.com/2020/08/12/books/review-entitled-how-male-privilege-hurts-women-kate-manne.html 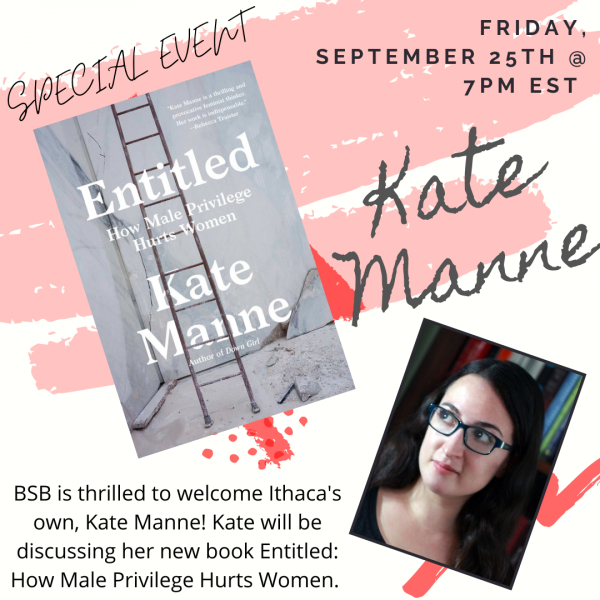 In clear, lucid prose, Manne argues that male entitlement can explain a wide array of phenomena, from mansplaining and the undertreatment of women’s pain to mass shootings by incels and the seemingly intractable notion that women are “unelectable.” Moreover, Manne implicates each of us in toxic masculinity: It’s not just a product of a few bad actors; it’s something we all perpetuate, conditioned as we are by the social and cultural mores of our time. The only way to combat it, she says, is to expose the flaws in our default modes of thought while enabling women to take up space, say their piece, and muster resistance to the entitled attitudes of the men around them.

With wit and intellectual fierceness, Manne sheds new light on gender and power and offers a vision of a world in which women are just as entitled as men to our collective care and concern.

Kate Manne is an associate professor of philosophy at Cornell University, where she has taught since 2013. She did her graduate work at MIT and was a junior fellow in the Harvard Society of Fellows. The author of Down Girl, Manne has written for The New York Times, Boston Review, HuffPost, The Times Literary Supplement, and Politico, among other publications. She was recently named one of the “World’s Top 10 Thinkers” by Prospect (UK).