Rosie Danan in Conversation with Meryl Wilsner and Adriana Herrera

Join us for a very special virtual romance panel! We are so excited to welcome debut author Rosie Danan, whose romance novel The Roommate comes out September 15th! Rosie will be in conversation with two other romance novelists, Meryl Wilsner and Adriana Hererra! 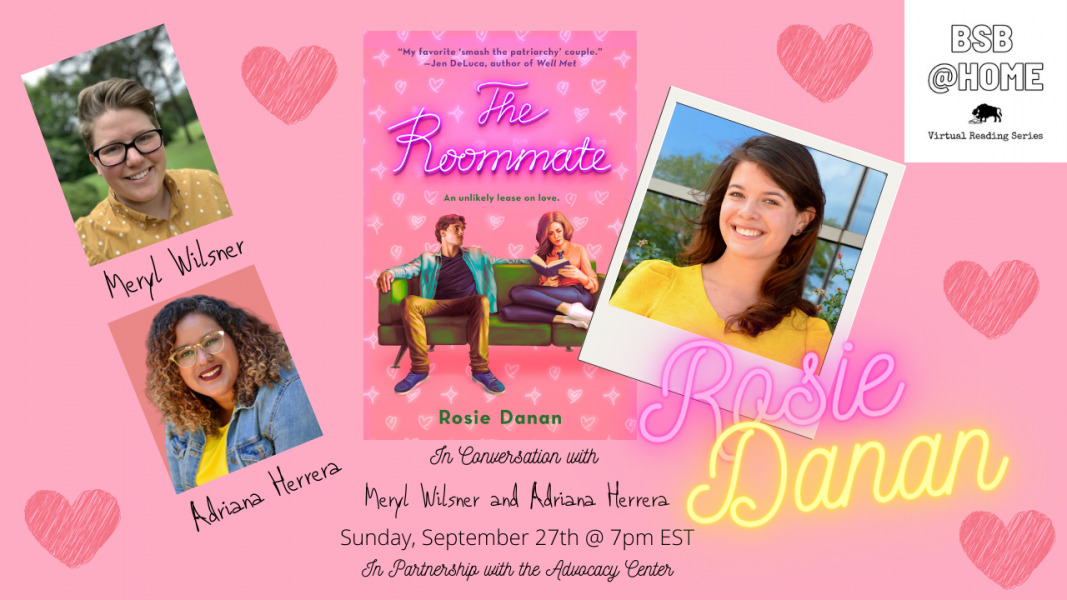 Rosie Danan writes steamy, bighearted books about the trials and triumphs of modern love. Her debut novel, THE ROOMMATE comes out 9/15/20 from Berkley/Penguin (US) and Piatkus/Little Brown (UK). When not writing, she enjoys jogging slowly to fast music, petting other people’s dogs, and competing against herself in rounds of Chopped using the miscellaneous ingredients occupying her fridge. As an American expat living in London, Rosie regularly finds herself borrowing slang that doesn’t belong to her.

Meryl Wilsner was born in Michigan, but lived in Portland, Oregon and Jackson, Mississippi before recently returning to the Mitten State. Some of Meryl’s favorite things include: all four seasons, button down shirts, the way giraffes run, and their wife. Meryl writes love stories about women who take so long to kiss you want to fling yourself into the sun.

Adriana Herrera was born and raised in the Caribbean, but for the last fifteen years has let her job (and her spouse) take her all over the world. She loves writing stories about people who look and sound like her people, getting unapologetic happy endings. When she’s not dreaming up love stories, planning logistically complex vacations with her family or hunting for discount Broadway tickets, she’s a trauma therapist in New York City, working with survivors of domestic and sexual violence. Her Dreamers series has received starred reviews from Publisher’s Weekly and Booklist and has been featured in The TODAY Show on NBC, Entertainment Weekly, NPR, Library Journal and The Washington Post. Her debut, American Dreamer, was selected as one of Booklist’s Best Romance Debuts of 2019, and one of the Top 10 Romances of 2019 by Entertainment Weekly. Her third novel, American Love Story, was one of the winners in the first annual Ripped Bodice Award for Excellence in Romantic Fiction. Adriana is an outspoken advocate for diversity in romance and has written for Remezcla and Bustle about Own Voices in the genre. She’s one of the co-creators of the Queer Romance PoC Collective.

Something to Talk About (Paperback)