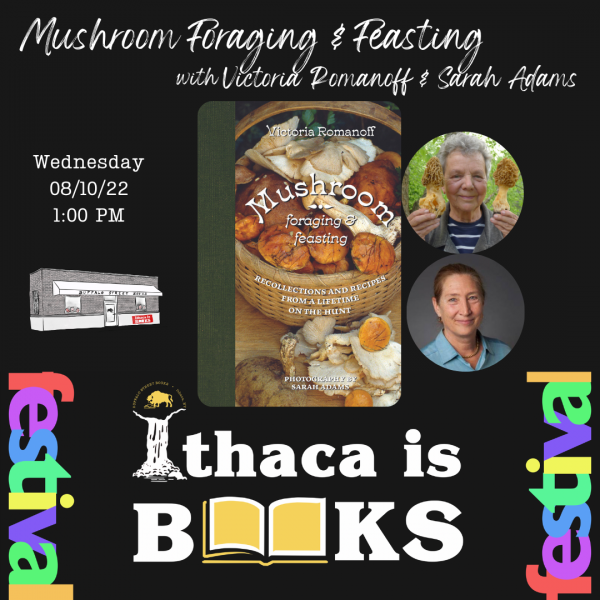 Victoria Romanoff picked her first mushroom—a brown-capped butterpilz or sticky bun—at the age of four, at her family’s summer dacha on the shores of the Baltic Sea. Little did she realize that her newfound interest in mushrooming would soon become an essential survival skill, as she and her mother spent eight years in displaced persons camps in the aftermath of World War II, foraging wild foods to supplement their diets. Resettled in the United States, Romanoff has continued to pursue her mycological passion ever since, deploying her considerable culinary skills to convert friends and strangers to the joys of wild mushrooms. Now, in this marvelously written book, rich with anecdote, she shares the wisdom gathered from a lifetime on the hunt.

Romanoff introduces readers to twelve of the most easily foraged and delicious mushrooms, including the chanterelle, the morel, and the oyster. She describes the appearance, habits, and lore of each variety, and provides a recipe for each; her recipes include both refined kitchen creations and rustic dishes meant to be prepared over an open fire at the end of a successful hunt. Romanoff also shares personal stories from her eight decades of mushrooming. From serendipitous discoveries while canoeing to habitual hikes with Piglet (in fact a terrier, not a truffle pig), her detailed accounts bring alive the sensory experience of the hunt, and the particular connection with nature that a forager enjoys.

Illustrated throughout with photos by Romanoff’s partner Sarah Adams—which are instructive and sometimes whimsical—Mushroom Foraging and Feasting will be a friendly primer for novice mushroom hunters and an unexpected delight for veteran mycophiles.

Victoria Romanoff, a visual artist and architectural preservationist, is a principal of V. Romanoff & Associates, a firm that has restored many historic storefronts and other structures in the Finger Lakes region of New York. For several years she was co-owner and head chef of Trattoria Tre Stelle in Ithaca, New York, an Italian restaurant whose wild mushroom dishes were covered in Saveur, Bon Appetit, and many other publications.

Sarah Adams is a licensed real estate agent and architectural preservationist based in Ithaca, NY.

Mushroom Foraging and Feasting: Recollections and Recipes from a Lifetime on the Hunt (Hardcover)