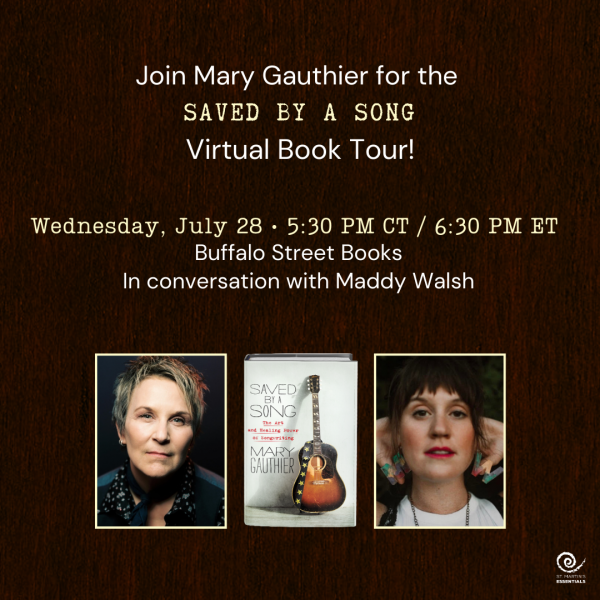 Join us for a very special event with Grammy-nominated American folk singer-songwriter and author Mary Gauthier, who will be discussing her new book Saved By a Song: The Art and Healing Power of Songwriting with Maddy Walsh.

This event requires a book purchase to attend. Upon purchasing a ticket, attendees will be sent the private crowdcast link to stream the event. Tickets (linked below) are available through eventbrite; there are two ticket bundles availavle. Make sure you select the correct bundle, based on how you want to receive your book (in-store pickup or shipping). The first 12 people to purchase a ticket will recieve a signed bookplate from Mary along with their book.

The Associated Press named Mary Gauthier one of the best songwriters of her generation. Her album Rifles & Rosary Beads was nominated for a Grammy award for Best Folk Album and Record of the Year by the Americana Music Association. Her songs have been recorded by dozens of artists, including Boy George, Blake Shelton, Tim McGraw, Bettye Lavette, Kathy Mattea, Amy Helm and Candi Staton. Saved by a Song is her first book. She lives in Nashville.

Maddy Walsh, lead singer and songwriter of Ithaca, NY based moxy rock band The Blind Spots, holds a BA in English and Creative Writing from SUNY Binghamton and a MA in the same field (concentration in poetry and creative nonfiction) from CSU Sacramento. She has released one solo Folk / Americana album and three Indie Pop Rock albums with The Blind Spots, which can be found on the band's website, www.theblindspots.com. Her poetry and essays have have appeared in various literary publications and compilations, and her piece "Placer County Jail" was named a notable in the Best American Essays 2013; more of this work can be found at maddmoxy.blogspot.com. She spends a good part of the year touring the country with The Blind Spots, finding her greatest joy in music and in motion... as well as in yoga, human interaction, red wine, thrifting, and dogs.

Saved by a Song: The Art and Healing Power of Songwriting (Hardcover)