BSB is beyond excited to host Laurie Elizabeth Flynn for the launch of her adult debut, The Girls Are All So Nice Here, which has been optioned for television by AMC and is a March Indie Next pick! 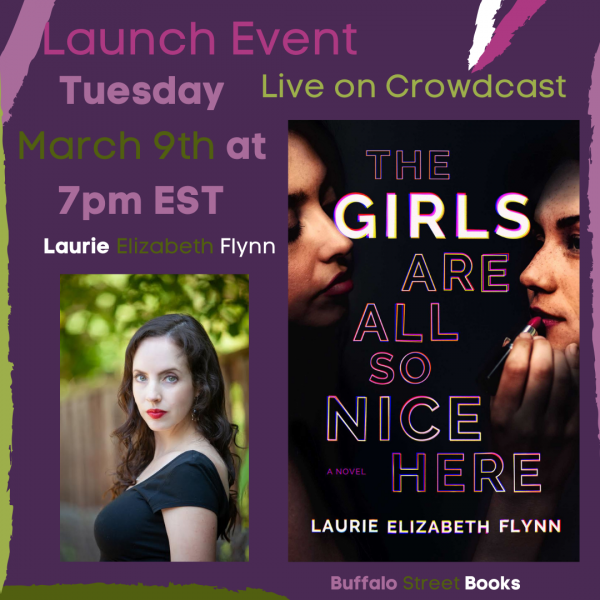 This event will be hosted live on crowdcast, and you can register here!

Two former best friends return to their college reunion to find that they’re being circled by someone who wants revenge for what they did ten years before—and will stop at nothing to get it—in this shocking psychological thriller about ambition, toxic friendship, and deadly desire.

A lot has changed in the years since Ambrosia Wellington graduated from college, and she’s worked hard to create a new life for herself. But then an invitation to her ten-year reunion arrives in the mail, along with an anonymous note that reads “We need to talk about what we did that night.”

It seems that the secrets of Ambrosia’s past—and the people she thought she’d left there—aren’t as buried as she’d believed. Amb can’t stop fixating on what she did or who she did it with: larger-than-life Sloane “Sully” Sullivan, Amb’s former best friend, who could make anyone do anything.

At the reunion, Amb and Sully receive increasingly menacing messages, and it becomes clear that they’re being pursued by someone who wants more than just the truth of what happened that first semester. This person wants revenge for what they did and the damage they caused—the extent of which Amb is only now fully understanding. And it was all because of the game they played to get a boy who belonged to someone else, and the girl who paid the price.

Alternating between the reunion and Amb’s freshman year, The Girls Are All So Nice Here is a shocking novel about the brutal lengths girls can go to get what they think they’re owed, and what happens when the games we play in college become matters of life and death.

Praise for The Girls Are All So Nice Here:

“Laurie Flynn smartly examines the darker complexities of friendship, ambition, and social dynamics in this propulsive thriller. Full of twists and surprises, The Girls Are All So Nice Here reminds us that the past has a long reach, and secrets never stay buried forever. I couldn’t stop reading until the shocking final twist!”—Megan Miranda, bestselling author of The Girl From Widow Hills

“Dark, twisted, and utterly gripping, The Girls Are All So Nice Here  explores the unparalleled cruelty of mean girls on a leafy college campus. This propulsive thriller has a killer ending to match its killer title.”—Robyn Harding, bestselling author of The Swap

“The Girls Are All So Nice Here is twisted, compelling, and so very dark. This devastating story about the friends we keep—and those we don’t—is surprising in the best possible way. Flynn’s first adult fiction book makes me wonder what she’ll come up with next.”—Samantha Downing, USA Today bestselling author of My Lovely Wife and He Started It

“Juicy, twisty, and relentlessly unsettling, The Girls Are All So Nice Here is more than a thriller; it’s a masterful portrait of the complexities of female friendships and the raw yearning to fit in. With characters unflinchingly wrought in all their vulnerability and a setting so real, I felt I’d visited the Wesleyan campus myself, this book is a brilliant and wickedly wild ride. I couldn’t put it down.” —Andrea Bartz, bestselling author of The Lost Night and The Herd

“Deliciously dark, full of simmering menace, and I totally fell under its compelling and addictive spell.”
— Karen Hamilton, bestselling author of The Perfect Girlfriend

“Chilling, disturbing, and spellbinding, The Girls Are All So Nice Here by Laurie Elizabeth Flynn is a brilliantly written, terrifying dive into toxic friendship, deep insecurity, betrayal, and revenge. A shocking thriller that crackles with tension on every page, it’s a breathless, unforgettable read.”
— Samantha M. Bailey, #1 bestselling author of Woman on the Edge

“With The Girls Are All So Nice Here, Flynn takes the insecurities that come with being a young woman and sharpens them into a deadly point. I read open-mouthed as Amb navigated the complex social calculus of her worlds right up until that stinging kick of a final chapter left me breathless.”—Chandler Baker, New York Times bestselling author of Whisper Network

“So deliciously dark, and I was completely hooked from the first page. . . . Incredible. . . . It’s Mean Girls all grown up, with a very dark twist!”— Elle Croft, bestselling author of The Guilty Wife

“Using the sharpest, most devastating of scalpels, Flynn lays bare the darkness that pulses under the surface of toxic female friendships. Raw, visceral, unbearably tense, I raced through it with a knot in my stomach.”— Tammy Cohen, bestselling author of Stop at Nothing

“Dark and twisted, I thought it captured perfectly the devastating cruelty teenage girls can inflict on one another when they themselves are fundamentally damaged.”— Nikki Smith, author of All in Her

The Girls Are All So Nice Here: A Novel (Hardcover)