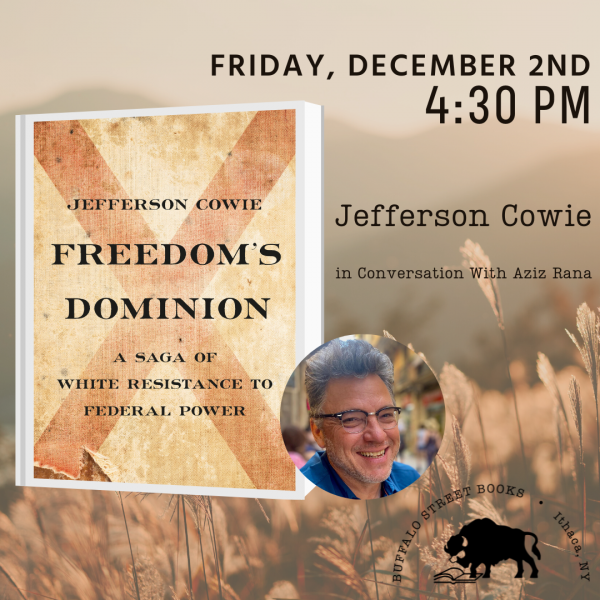 Vanderbilt historian Jefferson Cowie traces a definitive through-line of state and local confrontations with big government in FREEDOM’S DOMINION: A Saga of White Resistance to Federal Power to show how white Americans have fought to preserve a particular aspect of their freedom since the nation’s beginnings in settler colonialism and chattel slavery: the freedom to dominate others. Using the example of Barbour County, Alabama—ancestral home of segregationist Governor George Wallace—Cowie covers the seizure of Native lands, support for secession, defiance of Reconstruction, Jim Crow laws and rising terror in the 20th century, skepticism of the New Deal, and opposition to desegregation and the Civil Rights Act that carries through to the political climate of the present. He argues: “These stories are not simply regional tales lost in the dark, overgrown thickets of the past. They are quintessentially American histories—inescapably local, yet national in theme, scope, and scale.”

Jefferson Cowie holds the James G. Stahlman chair in history at Vanderbilt University. He is the author of three books, including Stayin’ Alive: The 1970s and the Last Days of the Working Class, and his work has appeared in numerous outlets including Time, the New York Times, Foreign Affairs, and Politico. He lives in Nashville, Tennessee.

About the Conversation Partner

Aziz Rana is the Richard and Lois Cole Professor of Law at Cornell Law School. His research and teaching center on American constitutional law and political development, with a particular focus on how shifting notions of race, citizenship, and empire have shaped legal and political identity since the founding.