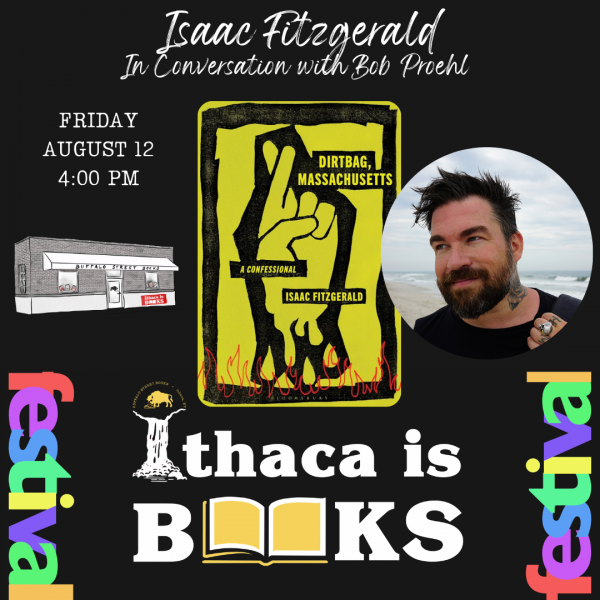 Fitzgerald's memoir-in-essays begins with a childhood that moves at breakneck speed from safety to violence, recounting an extraordinary pilgrimage through trauma to self-understanding and, ultimately, acceptance. From growing up in a Boston homeless shelter to bartending in San Francisco, from smuggling medical supplies into Burma to his lifelong struggle to make peace with his body, Fitzgerald strives to take control of his own story: one that aims to put aside anger, isolation, and entitlement to embrace the idea that one can be generous to oneself by being generous to others.

Gritty and clear-eyed, loud-hearted and beautiful, Dirtbag, Massachusetts is a rollicking book that might also be a lifeline.

Isaac Fitzgerald appears frequently on The Today Show and is the author of the bestselling children’s book How to Be a Pirate as well as the co-author of Pen & Ink: Tattoos and the Stories Behind Them and Knives & Ink: Chefs and the Stories Behind Their Tattoos (winner of an IACP Award). His writing has appeared in The New York Times, The Guardian, The Best American Nonrequired Reading, The Boston Globe and numerous other publications. His debut memoir, Dirtbag, Massachusetts, is out now. He lives in Brooklyn.

About the Conversation Partner

Bob Proehl is the author of The Nobody People and A Hundred Thousand Worlds, a Booklist best book of the year. He has worked as a bookseller and programming director for Buffalo Street Books in Ithaca, New York, a DJ, a record store owner, and a bartender. He was a New York Foundation for the Arts Fellow in Fiction and a resident at the Saltonstall Arts Colony. His work has appeared on Salon, as part of the 33⅓ book series, and in American Short Fiction.

How to Be a Pirate (Hardcover)