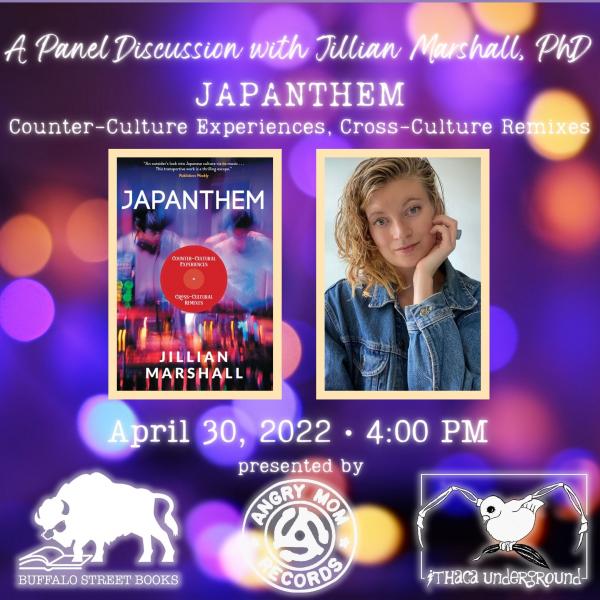 Buffalo Street Books, in partnership with Ithaca Underground and Angry Mom Records, is proud to welcome Jillian Marshall, PhD, back to Ithaca for the release of her new book Japanthem: Counter-Cultural Experiences, Cross-Cultural Remixes as part of our Independent Bookstore Day celebration.

Please join us for a live, in-store reading from Japanthem, followed by a panel discussion that will include award-winning playwright and dramaturge Anne Hamilton and Ithaca Underground board representative & BSB staff member Charles Chatman.

Both personally revealing and informed by years of Fulbright- and MTV-sponsored research, Japanthem’s honest vignettes delve beyond the aspects of Japanese culture that have captivated the western world to portray a society’s deep relationship with music, and what it means to listen and understand as a cultural outsider. Informed by a decade of back-and-forth across the Pacific while researching her doctoral thesis in ethnomusicology, Jillian Marshall explores the music of contemporary Japan through a prism of serendipity, romance, unique underground culture, learning life lessons the hard way, and an insatiable curiosity for the human spirit. The book’s twenty vignettes are based off first-hand experience, and illustrate music’s fascinating relationship to Japanese society with honesty, intelligence, and humor. Japanthem offers a uniquely nuanced portrayal of life in the Land of the Rising Sun — while encouraging us to listen more deeply in the process.

Jillian Marshall grew up in a rural town in Vermont, just south of the French-Canadian border. After graduating from the University of Chicago in 2009, she moved to a fishing village in Japan to teach middle school English. She came back to the US to pursue a doctorate in ethnomusicology at Cornell University, frequently returning to Japan to conduct research on contemporary Japanese music. Following the completion of her PhD in 2018, she left academia in pursuit of a more public intellectualism. In addition to writing, Jillian currently  teaches the languages and  history of Japan and China; she  is also a lifelong musician, and  plays trumpet and piano. She  lives in Brooklyn, New York.

Anne Hamilton is a NYC-based freelance dramaturg and the Founder of Hamilton Dramaturgy, an international consultancy. She created Hamilton Dramaturgy’s TheatreNow!, where she hosts and produces an oral history podcast series of important theatre women working in America. Anne has dramaturged for Andrei Serban, Michael Mayer, Lynn Nottage, NYMF, Niegel Smith, Classic Stage Company, and the Negro Ensemble Company, among others. She is also an award-winning playwright. Her chapter, “Freelance Dramaturgs in the 21st Century: Journalists, Advocates and Collaborators” appears in The Routledge Companion to Dramaturgy. She is a Dramaturgy Editor for The Theatre Times, a leading online global theatre journal. Hamilton was a Bogliasco Foundation Fellow, won the Dean’s Prize for Dramaturgy at Columbia University School of the Arts, and holds dual citizenship in Italy and the United States.

Charles Chatman is an Ithaca Underground board member and bookseller at BSB. While they are a new board member, they're no stranger to the Ithaca music scene, running shows at Cornell's Fanclub Collective in their undergrad and performing in town for years, most recently under their gothic improv noise moniker, Flose. When they're not beguiling customers into reading dark genre fiction , helping out at shows, or gently pressing electric toothbrushes against cymbals, they're making ice creams, petting cats, and watching movies. (Side note: Charles took a Freshman Writing Seminar with Jillian exploring her field work in their first year and is elated at the reunion opportunity!)