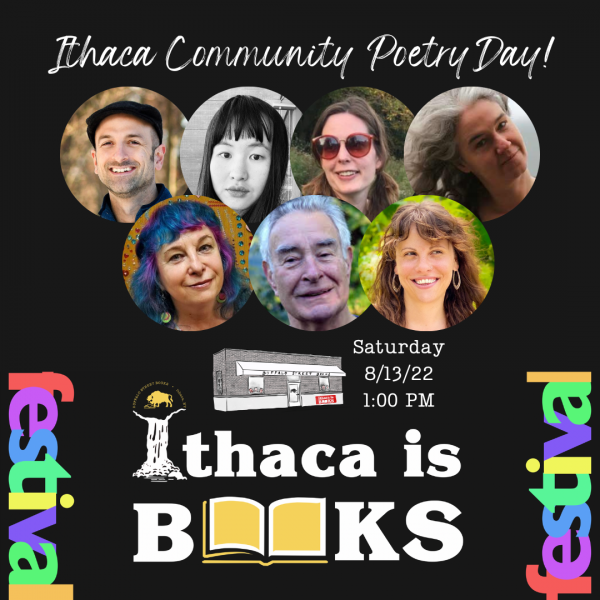 Join local poets, reading from their own work and duscussing the role of the poet in our community.

nicole v basta is a poet with proud familial roots in the coal mines and garment factories of Wilkes-Barre, Pennsylvania. Her poetry, art practices, and teaching practice are rooted in wild making, not academics, and connected to the traditional sense of resourcefulness of her ancestors. That being said, she creates with the blessings of sacred uselessness and is actively decolonizing her idea of success.Her poems have found homes in Ploughshares, Waxwing, Sixth Finch, RHINO, Crazyhorse, Plume, Epiphany, Tinderbox, Ninth Letter, etc. nicole’s first chapbook V was chosen by Rigoberto González as the winner of The New School's Annual Contest and her second chapbook the next field over was published by Tolsun Books in January 2022.

Jack Hopper is a poet and editor. He founded and coedited Works: A Quarterly of Writing, has had four published collections of poetry, most recently Rafting the Medusa (2018). He has appeared in several magazines, as well as the 2016 CLB Poetry Anthology, which he coedited. He is a co-founder and editor of Cayuga Lake Books, has served twice as poet laureate of Tompkins County (2015, 2016), and presently is working on a memoir.

David Lehman is an American poet, non-fiction writer, and literary critic, and the founder and series editor for The Best American Poetry.

Lydia Liu is a finalist in the 2022 Poetry Society of America Chapbook Fellowship contest, selected by Eileen Myles, and a recipient of the Bain-Swiggett Poetry Prize from Princeton University (2016), the Dorothy Rosenberg Memorial Prize in Lyric Poetry from UC Berkeley (2019), and the C.D. Wright Memorial Scholarship from the Poetry Program at the Community of Writers (2020).

Katharyn Howd Machan studied creative writing and literature at the College of Saint Rose and at the University of Iowa, taught college for five years, returned to graduate school for a Ph.D. in Interpretation at Northwestern University and, now as a full professor, has been teaching on the faculty of the Department of Writing at Ithaca College ever since. For many years she directed the national Feminist Women's Writing Workshops. Her poems have appeared in numerous magazines, anthologies, and textbooks and in more than 30 collections.

Alicia Rebecca Myers is a poet and essayist who received her MA in English from the University of Georgia and my MFA in Creative Writing from New York University. ​For seven years, she worked as a travel agent, and her poem "The Last Travel Agent" was selected by Tracy K. Smith for Best New Poets 2015. Her poem "Winter Solstice" was selected by Kaveh Akbar for Best New Poets 2021.

Dan Rosenberg is the author of Bassinet (Carnegie Mellon University Press, 2022),  cadabra (Carnegie Mellon University Press, 2015), and The Crushing Organ (Dream Horse Press, 2012). He has also written two chapbooks, Thigh's Hollow (Omnidawn, 2015) and A Thread of Hands (Tilt Press, 2010), and he co-translated Miklavž Komelj's Hippodrome (Zephyr Press, 2016). His work has won the American Poetry Journal Book Prize and the Omnidawn Poetry Chapbook Contest. Rosenberg holds a B.A. from Tufts University, an M.F.A. from the Iowa Writers' Workshop and a Ph.D. from The University of Georgia, where he was a Presidential Fellow. He is the chair of the English department at Wells College, where he  teaches literature, creative writing, and translation theory.

Melissa Tuckey is a poet, writer, and literary activist living in Ithaca, New York. She is the author of Tenuous Chapel and a cofounder of Split This Rock, a national literary organization dedicated to supporting socially engaged poetry.