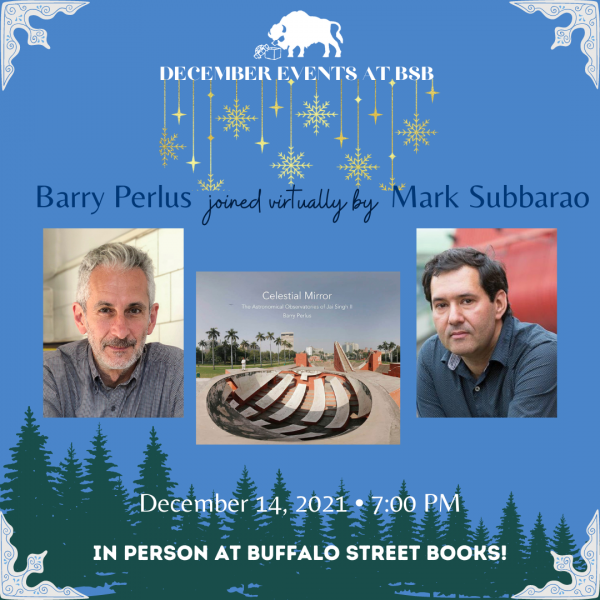 BSB is excited to present a fascinating in person event for the skygazing community of Ithaca: Cornell's Barry Perlus will be in store and joined virtually by Dr. Mark Subbarao of NASA's Goddard Space Flight Center, for a conversation about Dr. Perlus's new book Celestial Mirror: The Astronomical Observatories of Jai Singh II.

Between 1724 and 1730, Maharaja Sawai Jai Singh II of Jaipur constructed five astronomical observatories, called Jantar Mantars, in northern India. The four remaining observatories are an extraordinary fusion of architecture and science, combining elements of astronomy, astrology, and geometry into forms of remarkable beauty. The observatories’ large scale and striking geometric forms have captivated the attention of architects, artists, scientists, and historians worldwide, yet their purpose and use remain largely unknown to the public.

In this book, Barry Perlus’s visually driven exploration brings readers to the Jantar Mantars and creates an immersive experience. Panoramas plunge the viewer into a breathtaking 360-degree space, while pages of explanatory illustrations describe the observatories and the workings of their many instruments. The book provides the experience of visiting the sites, the historical context of the Jantar Mantars, and an understanding of their scientific and architectural innovations.

Barry Perlus is associate professor emeritus of art and former associate dean in the College of Architecture, Art, and Planning at Cornell University. He has taught courses in photography since 1984, and received support for his creative work from the Graham Foundation for Advanced Studies in the Fine Arts and the Einaudi Center for International Studies at Cornell.

Dr. Mark Subbarao is an astronomer and lead at NASA's Scientific Visualization Studio at NASA Goddard Space Flight Center. In 2019-2020 he was president of the International Planetarium Society, and prior to taking his position at NASA he directed the space visualization lab at the Adler Planetarium in Chicago.