Adventure Capitalism with Raymond B. Craib 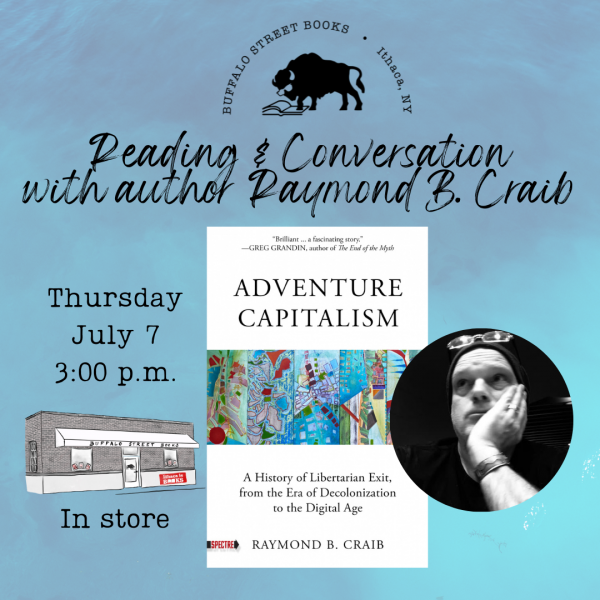 Join author Raymond B. Craib for a reading a conversation about Adventure Capitalism from PM Press.

Adventure Capitalism writes the story of exit as a global history, one that intersects with an array of figures: Fidel Castro and the Koch brothers, American segregationists and Melanesian socialists, Honolulu-based real estate speculators and British Special Branch spies, soldiers of fortune and English lords, Orange County engineers and Tongan navigators, CIA operatives and CBS news executives, and a new breed of techno-utopians and an old guard of Honduran coup leaders. It is, in other words, is a history of our time. Given the new iterations of privatized exit now being pursued—seasteads, free private cities, and space colonization—it may also be a history of our future.

Raymond B. Craib is the Marie Underhill Noll Professor of American History at Cornell University and the author of The Cry of the Renegade: Politics and Poetry in Interwar Chile, Cartographic Mexico: A History of State Fixations and Fugitive Landscapes, and with Barry Maxwell, co-editor of No Gods No Masters No Peripheries: Global Anarchisms.

Craib will read from the book and then be in conversation with Sasha Lilley, the co-founder and host of the critically acclaimed program of radical ideas, Against the Grain. Sasha is the author of Capital and Its Discontents and Catastrophism: The Apocalyptic Politics of Collapse and Rebirth, among other works, and is the editor of the imprint Spectre for PM Press.

Adventure Capitalism: A History of Libertarian Exit, from the Era of Decolonization to the Digital Age (Spectre) (Paperback)